It’s well publicised and often well documented that, for musicians, alongside a great looking website there should also be a solid social media presence. Bands, artists and record labels alike need more than just a functioning website; they need to be able to drive people to that site and the best way to achieve this is through the medium of social media.

We’ve put together a few social media pieces recently discussing how to promote yourself on YouTube, how to create an awesome Facebook page and how often you should Tweet to name just a few.

But how do you know if what we’re saying is any good? Should you simply take our word for it? Have you tried some techniques for yourself to no avail?

Here we dissect a case study recently put into practice for a client of ours. They are a UK based group who have done gigs throughout mainland Europe but are looking to conquer America in the future and asked us to head their social media campaign and lay the foundations of success. From there we are looking to gain maximum exposure for them whilst at the same time guide them in the right direction in their aim to have their music played all over the globe.

We’ve decided to keep our client anonymous to avoid being labeled as biased and quell any accusations of favoritism.

The key to managing your social media profiles and increasing your followers is to do all three: 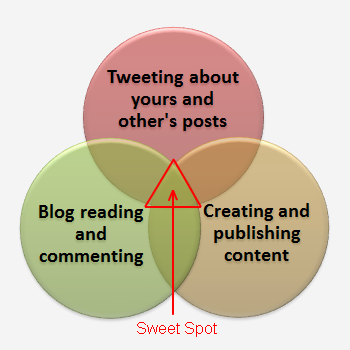 The sweet spot in the diagram shows where you need to be operating in order to receive huge amounts of followers and fans who are the exact target market you are aiming for and are hugely influential all at the same time.

This is the service we offer for our clients and in doing so, we increase their number of followers naturally. Rather than #IFollowBack and #FollowMeForFollowers style Tweeting, we focus our client’s output with Tweets in and around their industry in order to bring them hordes of followers who are all interested in what they’re saying.

We read industry/genre related blog posts and leave comments on them on behalf of our clients whilst at the same time creating regular content for their blog and publishing it in areas where their target market is assembled. In general, the more you reach out, the wider your catchment and the more people you will bring back to your website and blog. You just need to point them in the direction of your services with links and they will follow the breadcrumbs to your inquiries and contact areas.

In this post, we recorded the progress of one of our social media management clients on Twitter over the course of two weeks. Nothing too strenuous but considering that our client’s website had been up and running for 5 years and had only amassed a Twitter following of 82, they called us in to help with the increase of followers and fans.

It can be demoralising to see your followers increase in drips and drabs; some days you gain a follower or two and another day you lose a couple. It can sometimes seem like you’re hitting your head against a brick wall and taking one step forward then two steps backward, especially when you know that your website is making all the right noises.

As shown in the diagrams, our client’s following after 5 years of service was standing at 82 followers. In just 2 weeks of outsourcing their social media management to Cruizne, we increased their following by 80% and resulted in them increasing their Twitter followers to 147 after just 14 days.

At the time of typing, their following is actually at 166 (which is more than double their starting followers’ number), however for the purpose of easy monitoring and to make it easier to explain, we stopped the recording at the designated 2 weeks timescale.

Now, bearing in mind that we have agreed to a 6-month social media management campaign with the client, the ball is well and truly rolling and the growth for the future is definitely there for the taking. The thing with Twitter is that it’s really difficult to get your first 150 followers as trying to reach out to those initial followers is the hardest part of all.

Imagine your Twitter following as if it was a snowball rolling down the side of a hill… In order to get it started, it needs some sort of push or shove in the right direction. It starts off small and rolls slowly. As it travels down the side of the peak, it gains momentum; gaining speed and growing in size.

Before too long, the ball is traveling unaided and gaining its own size and speed as it continues its journey. The same is also true for Twitter followers.

The client in question is currently working throughout Europe. They are in Phase 1 of their three-phase operation. Phase 2 of the plan is to try to conquer the US, and Phase 3 of their operation is to go viral and play in front of international audiences. Their strategy to go global is already planned out and ready for execution.

As you can see, we have not only increased their followers in numbers but have targeted their branding towards nations throughout Europe who can benefit from what they offer. Phase 1 is well and truly in operation and Phase 2 shouldn’t be too far away.

We have already started laying the foundations for Phase 2 by gaining a following from the USA and Canada. This shows that they are Tweeting, reading and commenting on posts in the right area and are publishing great tracks, releases, and content on their website. As a result, more traffic is arriving on site that has originated from Twitter. 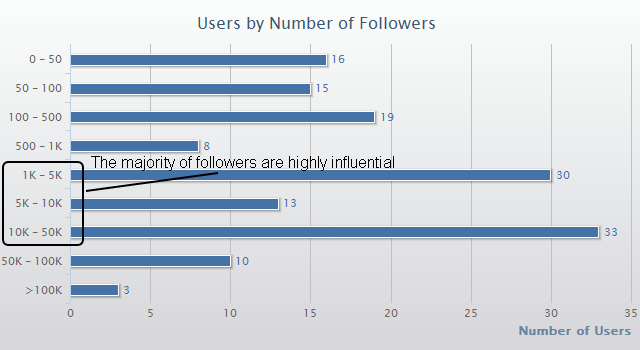 Now it’s all good getting more followers who all speak the same lingo and are from the areas where you’re aiming your products or services, but in order for your sound to be heard, you need to rely on third parties as well as your current website to gain exposure within the industry.

Gaining followers who are also influential is where you can really excel in the music industry. As Google and other search engines are now using social influence as a ranking factor, it has become more important than ever to have a following of people who are also influential. A mention on Twitter from a high profile musician or expert within the industry is likely to improve your search rankings in the same way as a link to your website will from a really strong website like Mix Mag or DJ Mag for instance.

By constantly making noise within the social sphere, constantly publishing new sounds and unique content and constantly reading and commenting on other blog posts, you are ensuring that not only does your social presence grow, but your search rankings will also benefit.

As you can see in the image above, the majority of followers which have been gained for our client are hugely followed themselves. This means that when we create great content for our client and publish it on their website, we also Tweet about it. Their influential followers will see the Tweet and – if the content is good enough – will re-Tweet the content to their own followers. They have huge amounts of followers so even though our client only has 166 followers, the potential reach that their content has is in the hundreds of thousands. Maybe millions.

All the people who look at our client’s content through these Tweets and re-Tweets are genuinely interested in the message they’re giving; otherwise they wouldn’t have clicked it, so they have the possibility to reach to audiences who are interested in their brand image without having to go out and actively seek them.

Social media is one of the main services that modern day marketers are focussing their efforts on – especially for client work. Outsourcing your social media management is a great option for musicians who may be a struggling for visibility in such a competitive market and small to medium sized businesses who may not have the time put the process into practice. 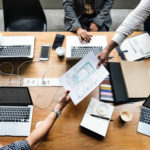 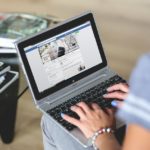 Create an Awesome Facebook Page in 3 Minutes – For Free!