Andy Warhol coined the expression “15 minutes of fame” but left behind a legacy that will keep him alive for much more than that. He was a painter, author, avant-garde movie maker, record producer, sculptor and a celebrity in his own right- quintessentially a Renaissance man of the 20th century. Much credit goes to Andy Warhol and his like minded contemporaries to usher in the Pop culture which became a tipping point for the cultural and social revolution of the mid 1900s, making the transition from the parochial mentality and Victorian prudishness to the liberal age that we witness today. The Pope of Pop brought the face of commercialism out on the open by emblazoning it on all forms of popular art. He gave the closeted form of the visual art movement known as Commercial Art or Pop Art a new lease of life by defying convention and adopting unorthodox means to create spectacular masterpieces making him as critics put it the most brilliant mirror of our times.

Andy Warhol was born Andrew Warhol, the fourth child of Slovakian migrants. A hypochondriac since birth, Warhol spent a lot of time in bed indulging in his favorite activities- drawing, collecting posters of movie stars and listening to the radio. This focal period of time was instrumental in setting the stage for much of his influences and later work. After graduating from the Carnegie Mellon University in commercial art, Warhol made a name for himself in the world of illustration and advertising. It was around this time that he drew shoe advertisements for I.E Miller in a whimsical, blotted ink style, which received rave reviews from the critics and provided a jump start to his career as a commercial artist.

April 1961, saw the revelation of the artistic genius of Warhol to the general public with the display of his work in the window display of New York Departmental Store Bronwit Teller. Warhol established a niche for himself among his contemporary pop artists by displaying articles of his daily use such as the now eponymous dollar bill paintings and Campbell’s Soup cans. It was gallerist Muriel Latow who provided Warhol with the idea of painting subjects, which would identify with the symbols of contemporary America, with whom every single person irrespective of age, class and race could identify with ease. This realization of a particular niche for himself turned to be an identifying moment in the career of Warhol.

He had this to say of Coca Cola which he famously portrayed in a series of paintings.

“What’s great about this country is that America started the tradition where the richest consumers buy essentially the same things as the poorest. You can be watching Coca Cola commercials on TV and you know that the President drinks Coca Cola, Liz Taylor drinks Coca Cola, and just think, you can drink Coca Cola, too. A coke is a coke and no amount of money can get you a better coke than the one the bum on the corner is drinking. All the cokes are the same and all the cokes are good. Liz Taylor knows it, the President knows it, the bum knows it, and you know it.”

His childhood obsession with the celebrities also led to the famous silkscreen paintings of the biggest names of the day including Marilyn Monroe, Elvis Presley, John Lennon, Liza Minelli, Muhammad Ali, Michael Jackson and Elizabeth Taylor. He also did portraits of political figures such as Mao Zedong and The Shah of Iran and his family. His 1963 canvas Eight Elvises fetched a mind boggling 100 million dollars, a figure that puts him in the league of the top artists of all time. These paintings often painted with garish colors and done in collaboration with a number of gifted assistants are as controversial as the man himself, gaining admiration for his bold portrayal of the crass commercialism of the day as well as inviting flak for being expressionless and bereft of emotion. He had to say this of the glitz and glamor of Hollywood and more often than not his favorite subject matters “I love Los Angeles. I love Hollywood. They’re so beautiful. Everything is plastic, but I love plastic. I want to be plastic”. Apart from being the white mole of the Page 3 society, Warhol also delved into serious work such as his portrayals electric chairs, suicides and disasters, clearly evident in his Death and Disaster series of 1962-63.

He also gave popularity to a new form of painting coined as piss paintings. These were canvases that had been earlier primed with copper based paint which then entailed the use of ghost pissers who used to urinate on the subject matter to oxidise the copper paint and bring the art to life. Although a discreet follower of the Orthodox Church, Andy Warhol’s extensive The Last Supper Cycle, happens to be the largest religious series by any artist in the US.

Although derided by critics as hogwash on the name of religion, Warhol considered his religious works to be, one of his finest. Andy Warhol passed away in the February of 1987. At the time of his death, he was working on a series called cars commissioned by the automobile giant BMW. He left behind countless paintings, innumerable works of art, several masterpieces and a legacy of a culture that defined the way future generations looked at art and their world. He brought out into the light of the day the market culture that was soon to grapple the rest of the world. For the better or the worse, Andy Warhol was a visionary and through his paintings he conveyed to the world, its present and its imminent future. 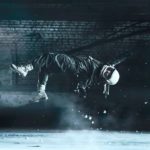